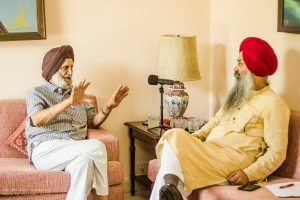 Not every day does one get an opportunity to walk into the living room of a national hero, and it is even more unlikely to have them recount and verbalise their life. In that lulling ambience, filled with nostalgic memoirs, Captain Mohan Singh Kohli sank into history and narrated details that bear testimony to the legends around the man who led the iconic Indian expedition to the Mount Everest in 1965.

The first-hand account is not only relevant in the national context but is explicit with touching tales of his energy, entity and belief. The conversation unravels numerous fascinating yet unknown aspects of his life, for example – as a seven year old child in Haripur (present day Pakistan), Capt. Kohli scaled hills to reach the crest where his ancestors were martyred and once the King of Nepal had sent his army to help him during one of his expeditions, when a local tribe ambushed his group.  In an effort to chronicle those stories and anecdotes which got shadowed amidst the overpowering recount of his feats, Bhai Baldeep Singh has taken on the responsibility to write a biography that could do justice to the life and times of the man who became a great mountaineer.

Even after authoring 27 books himself, Capt. Kohli feels that certain subtleties could only be justifiably written by someone who knows him personally but can still offer a fresh and unbiased perspective and for this reason, he chose Bhai Baldeep Singh. The Anād Foundation looks forward to working with the legend and publish the biography that will not only shed light on the unknown riveting aspects of the history of Indian mountaineering but also provide a primary account of Capt. Kohli’s stimulating and inspiring sojourn.