A direct descendant of Guru Bābā Nanak’s disciple Bhai Sadhāraṇ, Bhai Baldeep Singh descends from a long lineage of GurSikh masters of the Gurbāni Kīrtan maryadā, and today is its 13th generation exponent. Bhai Sadhāraṇ was the 2nd head of the Dharamsāl, the school of learning, founded by Guru Bābā Nanak at Kartapur (now in Pakistan) in 1521 AD. Bhai Sadhāraṇ was also endowed with a Manjī by the 3rd Sikh guru, Sāhib Srī Guru Amar Das. Bhai Baldeep Singh’s repertoire includes masterpieces that were first composed by the Sikh Gurus and the Bhagats themselves. Bhai Baldeep Singh is also the prime exponent (khalifā) of this oldest gharāna of classical percussions, pakhāwaj/mridang playing of Punjab known as Sultanpur Lodhi – Amritsari Bāj.

The Sikh gurus expressed deep spiritual mysteries through musical compositions in Chaṅṅt, Vār as well as the Pade or Dhurpad Gāyan, which has particularly been the music of the devotees of India’s many spiritual traditions. Bhai Baldeep Singh has been mentored in the dhrupad genre by his granduncles Bhai Avtar Singh (1925-2006) and Bhai Gurcharan Singh (1915-2017) as well as Ustad Rahim Fahimuddin Dagar (1926-2011), a 19th generation scion of the Dagar-vani and Ustad Malikzada Mohammad Hafiz Khan Khandehre Talwandiwale (d. 2009), the 133th exponent of the Khandar-vani.

The Sultanpur Lodhi – Amritsari bāj is the oldest surviving of all pakhāwaj-joṛī traditions in South-Asia. He is the for-bearer of one of the most illustrious lineages that was once known as Nāīyyāṅ-dā-gharāṇā for Baba Maiyya Singh’s father was the Nāī (hygienist) of Mahārāja Ranjit Singh.

Bhai Baldeep Singh has inspired interest in the structure of the classic poetic forms found in Gurbani, has revived the rare art of singing the 22 vaars (odes) and other folk based genres, and has awakened the artist elements hidden in the old compositions.  In 1988, Bhai Baldeep Singh undertook a herculean project to revive almost all the instruments from the Gurus’ times by personally handcrafting them under the guidance of master luthier Gyani Harbhajan Singh of Village Dandian, Hoshiarpur. Today, he has the unique distinction of having carved the nomadic rebāb (also known as the hindustani or dhrupadi-rebāb), sarandā, tāus, dilruba, tamburni (tanpura), jori and pakhāwaj – mridang. In January 2002, he made a violin based on the Stradivari violin in Spring City, Utah (USA), under the guidance of his friend Paul Hart, a master lute-maker. He has designed four new bows for the tāus, which have been handcrafted by Allan Herou in Paris (2003) and Nicola Galliena in Milan (January and March 2007, January 2008).

He has also made a detailed audio-visual presentation on the subject, The Musical Instrument of Gurbāni and Bhakti Traditions, which has received rave reviews around the world. Bhai Baldeep Singh has inspired people around the world to take up the musical instruments of the Gurus’ court. Many institutions around the world have now included the playing of some of these instruments as a part of their curriculum.

Bhai Baldeep Singh has developed a comprehensive educative process, which consists of the original practices of nāda yoga, and the modes of teaching-cum-learning traditionally prevalent among the exponents of Gurbani and Bhakti traditions. Besides giving many concerts, he has also conducted workshops, lecture-demonstrations and seminars in India, Europe, North America, Southeast Asia and Australia. Several of his articles, poems and papers have been published in renowned academic journals. Since May 2009, he has been conducting interviews for the National television (Doordarshan) and All India Radio (AIR), in which eminent artists and musicians are featured. 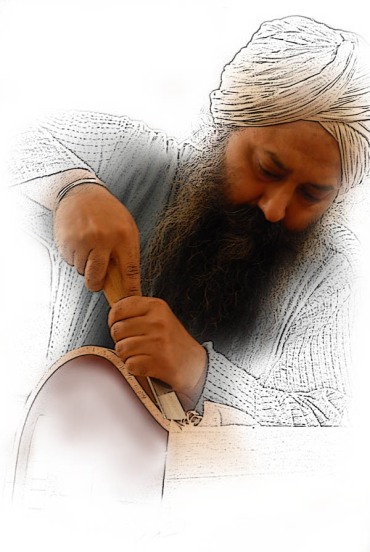 In 1997, he received the prestigious Bhai Batan Singh Memorial Award and Delhi State Annual Award (2002-03) for contribution in the field of Music. He has also been conferred the Sikh Gaurav Award for the year 2003 at Amritsar and in 2007, the Kapurthala Heritage Award at Kapurthala. On August 15, 2011, he received the Punjab State award for his seminal contribution to music (Gurbani Kirtan and classical music) and the arts. On January 6, 2017, Bhai Baldeep Singh was honoured by the Bihar Government with a Certificate of Merit for his extraordinary contributions.

Bhai Baldeep Singh has been very active in the contemporary Indian cultural scene by producing and publishing recordings of rare Indian musical instruments and contributing to the inter-religious and inter-cultural exchange organizing musical festivals and lectures. Some of his most successful presentations include Laya Darshan: Revealing the Riches of Indian Rhythm in 2005, Jashan in 2006, ANĀD Kav Tarang in April 2008, November 2009, November 2010, May 2011 and November 2011, Expressions On Nature: Dhart Suhavi in December 2008 as well as in September 2011 and Venice and Punjab: Water Memoirs on February 8, 2010 at the Tagore Theatre, Chandigarh.

Bhai Baldeep Singh is also a sensitive interpreter of the need for a cultural transformation and rejuvenation. He is the Founder and Managing Trustee of The ANĀD Foundation, a non-profit organization dedicated to the promotion and preservation of traditional culture, with particular focus on the preservation of South Asia’s intangible heritage and cultural traditions. One of The ANĀD Foundation’s aims is, in fact, to establish institutions as a means of facilitating the recovery and enhancement of the intangible (sukham virsā) and tangible (sthūl virsā) heritage. Bhai Baldeep Singh is in the process of developing the ANĀD Khaṅḍ: Conservatory of Arts, Aesthetics, Cultural Traditions and Developmental Studies, a 120 Crore project at Sultanpur Lodhi, Kapurthala (Punjab). To encourage the young talent to dedicate and express themselves in various artistic forms, including poetry and literature, especially in the vernacular arts, crafts and musical forms, the Foundation confers Anād Sanmān, in the fields of poetry, music, dance, sports, science, technology, art, literature, theatre, cinema and handicrafts. In memory of the Punjabi poetess Baljit Kaur Tulsi, the Anād Foundation organizes since 2008 the poetry festival Anād Kāv Tarang and confers the Anād Kāv Sanman, which is offered to eminent poets and carries a cash prize of Rupees 2.25 lacs, a citation and a tamra-patra.

Over the years, Bhai Baldeep Singh has served in many boards and committees notably in the Core Committee of the Khalsa Heritage Complex (Anandpur Sahib), Executive Committee of the Punjab State Sangeet Natak Academy (2001-3 and 2004-6). He served as a member of the Advisory Council of the Punjab Languages Department (2008-10) and helped the Punjab Government form the Sultānpur Lodhi Development Board in 2007 and served on its Board. He is also a patron of the Kapurthala Heritage Foundation, Kapurthala. From 2009-14 he represented the State of Punjab in the General Council of the National Academy of Music, Dance and Drama (Sangeet Natak Akademi) in New Delhi, where he also served in the Executive Board, in the Advisory Committees for Music, Archives and Documentation and in the Advisory Committee for Grants. 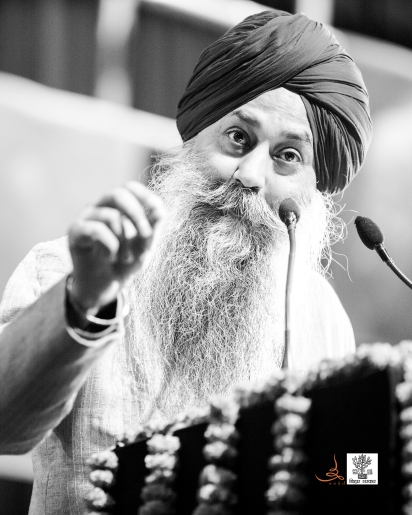 Bhai Baldeep Singh conceived and curated the Guru Gaurav 350, Bihar Government’s flagship event held at SKM Auditorium, Patna, to mark the 350th birth anniversary of the tenth Sikh Guru, Sahib Sri Guru Gobind Singh. Artists and performers from India and abroad were invited to the 6-day long event which has been considered as the biggest in Bihar’s history. Bhai Baldeep Singh then conceived and ideated Punjab Government’s concluding ceremony of the Guru Gobind Singh Sesquarcentennial held on December 24, 2017.  Bhai Baldeep Singh has been made the member of the Punjab Government’s committee that was set up in October 2017 to mark the upcoming 550th birth anniversary of Sahib Sri Guru Nanak Dev, the founder of GurSikh Panth.

An ardent socio-political activist and a voice for the humbled, he contested the 2014 Parliamentary Elections from Punjab’s Khadoor Sahib for the Aam Aadmi Party and came third with nearly 1,45,000 votes. As an independent political analyst, Bhai Baldeep Singh regularly features in debates on some of India’s top television channels.

Several of his articles and papers have been published by some of the top review magazines, edited books and academic journals including the Sikh Formations by Routledge, The Book Review and Seminar. Bhai Baldeep Singh actively blogs and posts on the social media.