The first year (summer of 97) that we studied with Bhai Baldeep Singh, he used some colorful language. One day some people sitting in the class heard us singing a newly composed rag bhairo exercise, “we are bloody fools”,  and chose to take offense. For Americans the word “bloody” doesn’t carry the weight of profanity that it might for English people, so there was a group of women that chose not to take offense. Those of us that were familiar with the language of Siri Guru Granth Sahib recognized the underlying sentiment. If the Guru himself can say “I am a fool” why can’t we? Ever since then we have lovingly remembered ourselves as “The Bloody Fools”. This month on April 1st, the group met at Guru Ram Das Ashram in Los Angeles to sing at the wedding of one of our daughters. After the wedding the mother of the bride realized the Bloody Fools had met to sing on April Fools Day! The wedding was a beautiful celebration of life and love. The glowing couple, eager to begin their new lives together, was surrounded by family, friends and flowers. Because there were family members who are unfamiliar with Sikh knowledge and practices, we sang a few songs with guitar, western harmonies and bani translated into English. The wedding ceremony began with a hukam that evoked the image of the righteous bride meeting her Lord with ease and it felt like a blessing.

We, the bride’s mother and her friends, sang the wedding shabds and laavaan, accompanied by jhori and taus.

Nirinjan Kaur plays the Jori with her little Dhyana at her side.

After the wedding, the hukam  came from rag sorath, “I don’t know how to worship. I can only chant God, God, Guru, Guru. I take the name of Ram Das….. I am a fool….. but millions like me have been saved….” 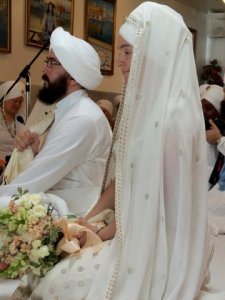 The Sikh gurus and the other authors of Siri Guru Granth Sahib painted images of the spiritual life with words in living color. They described the practitioner, the practice, the mind, and God itself with metaphors from everyday life that would be familiar to the people. Here are some metaphors collected from Gurbani Sangeet, from songs in the first five ragas.

MYSELF, THE PRACTITIONER: expatriot, foreigner, not beautiful, intoxicated, thirsty, an insect, a worm, a girlfriend, a merchant, a fool, a child, a bride, an ox with 4 feet, 2 horns and mute mouth, torn nose, injured shoulders.

FORGETTING AND THE NATURE OF THE MIND: poison, safflower which fades, not finding water, consumed by fire, terrifying ocean, whirlpool of anxiety, 5 demons, 5 powerful fighters, 5 relatives, 5 wedding guests, 5 thieves, dream, deep dark ditch, burning, churning, idiot who strikes his own foot with an ax in his own hand, dog’s tail that never straightens, a dried wick, exhausted oil, a silent drum, a sleeping actor, a fire that has gone out, the broken string of a rabab, screen of separation, drowning in an ocean of doubt.

LIFE AND HOW WE EXPERIENCE IT: vast oceans, torrential rains, violent storms, jewel of human birth, wheel of life, like oil press, night of life, like a dog wandering door to door, playful games, we are cared for like the baby flamingoes whose mother has flown away, who feeds them?

PRACTICE AND THE RESULTS OF REMEMBERING: good deeds are the soil, shabd the seed, irrigate with truth, loading the ox with merchandise, repair what was broken, warp and woof, dyed in the vat, a songbird catching a drop of water, begging at the

door, bathing, enjoying the Lord’s bed, enjoy like a wife delighted with her husband, mother with her son, camel with the vine, bee with the flower, a greedy man with wealth, washing feet with hair, rubbing the name on the mind like sandalwood on a stone, wash heart inwardly like washing an idol, playing, distilling to capture the steam of nam, playing unstruck melody on a harp, wedding, finding the hidden jewel on your forehead, the name shines, victorious warriors, like rivers and streams separated then united, blossoming after rain, rust removed, soul cleansed, carried across, bride adorned with ornaments, oil, jewels and silk clothing, the dry branch blooms.