Abstract for the Poster Presentation at the XXIX European Seminar in Ethnomusicology, Berne, Switzerland, 4. – 8. September 2013,
Cultural Mapping and Musical Diversity

This session was chaired by Professor Laura Leante. The other three presenters were Yann Laville (Switzerland) – The ambiguities of mapping: a few examples taken from FNS project Midas Touch and from the related exhibitions present at the Musee d’ethnographie de Newchatel, Hee-Sook Lee-Niinioja (Finland) – Arirang, Perpetual Korean Intangible Cultural heritage of Humanity, and Zhang Xingrong (China) – Musical Mapping of Yunnan province, Southwest China, 1984 to the present.

The Sikh Gurus (15-18 centuries) themselves created a system called Gurbani Kirtan that revived the whole musical traditions of India namely, pade, chantt, vaar and introduced newer forms such as partaal. Their compilation uniquely included the works of thirty other Bhakti Saints and Muslim Pirs of South Asia all of whom sang and lived between the 12th and 18th centuries. Given the turbulent political history of the Sikhs within the context of huge Muslim and Hindu majorities – the Sikh contribution to the Musical traditions of India has been overlooked. In spite of being one of the most important traditions of the music of ‘medieval’ and ‘pre-medieval’ India, a reservoir of information yet to be fully explored and analyzed, it stands nearly decimated. Considering the universal, tolerant, inclusive and plural message of Sikh scripture, the author’s research not only sustains the intangible heritage of the Sikhs but of India.

In the mid 80s, the author was introduced to Gurbani Kirtan and Sangeet, one of the oldest surviving musical lineages of Indian classical music, which was still being practiced in his family since eleven generations. His granduncles, Bhai Avtar Singh (1926-2006) and Bhai Gurcharan Singh (b.1915) were perhaps the last memory bearers of one of the last remaining streams of its knowledge.

The uniqueness about the abodh and/or sukham virsa (intangible heritage) is that every subsequent generation must learn it anew in order to sustain it. The sukham cannot be written or recorded in any medium in order to save it except a potential protagonist’s memory. Even more so, the tools to revive and conserve a near extinct heritage are also drawn from the realm of the intangible. When the author’s long and painstaking journey in recovering the Gurbani Kirtan shabd-reets (vintage compositions) began, he realized that there was so much more to the tradition than the extraordinary shabd-reets. Thus, he began a meticulous mapping and documentation of this tradition. Particular instruments, most becoming extinct by mid-20th century, were created and others adapted and appropriated for use in Gurbani Kirtan during the Sikh guru period. When a tradition dies, its pedagogical processes, the raga (melodic mode) – tala (established rhythmic patterns) forms, musical instruments – their lutheiry skills, playing modes, tool making and their usage, string making and usage, stringing and playing modes of particular instruments, oral narratives and so much more becomes extinct.

The ancient shabd-reets, many of them originals composed by some of the Gurus, Bhagats and Sufi masters, are so much more than a mere arrangement of notes. The author would like to write about the recovered riches as well as imagining the revival and regeneration of a tradition in a thematically chosen space, where the last remaining story-tellers converge as if in a prayer so the sacred lands may bloom again —where a tangible asset, a 12th century fort, is restored on the basis of vernacular architecture and proposed for adaptive reuse as a conservatory dedicated exclusively to the study of the cultural traditions of the land.

The following is the poster (A0) I presented at the seminar. Each poster presentation had the participant speak for up to 15 minutes in the main auditorium with the interaction in the hall used more as interaction area. I was very glad with the response from so many senior ethnomusicologists and anthropologists. I spoke about the 27 years long recovery process when so much of the Gurbani Sangeet tradition has been salvaged including singing – the ragas and their grammar, musical instruments including rabab, saranda, jori, pakhawaj and taus – making and their playing techniques, has been revived and now made being disseminated at the Anad Conservatory site, Qila, Sultanpur Lodhi, Kapurthala, Punjab, by Anad Foundation in partnership with the Punjab Government.

Many images of elders from who mentored me over the last 27 years as well as of some of the youngest students who are now being taught at the Qila site were included in the poster. It also included the poster Kamleshwar Singh designed for the 31-raga rendition done by me on September 2, 2013 at the seminar hosted by the Center on Studies in Sri Guru Granth Sahib, Guru Nanak Dev University, Amritsar. A copy of the poster prepared by me for the ESEM XXIX, Berne, is being shared below:

Example of intangible heritage being sung – a 16th century composition of Guru Ramdas in Raga Kanra.

With Professor Giovanni Giuriati of La Sapienza, Rome. He still remembered my talk at his department that I gave in 1995, I think, when I sat on his table and sang in student ham-packed room!

The reception area where a lot of post session discussion happens…

A discussion on instrument taus with an Austrian research scholar who is studying a Tibetan tradition and speaks fluent Chinese.

With Professor Giuriati and others… 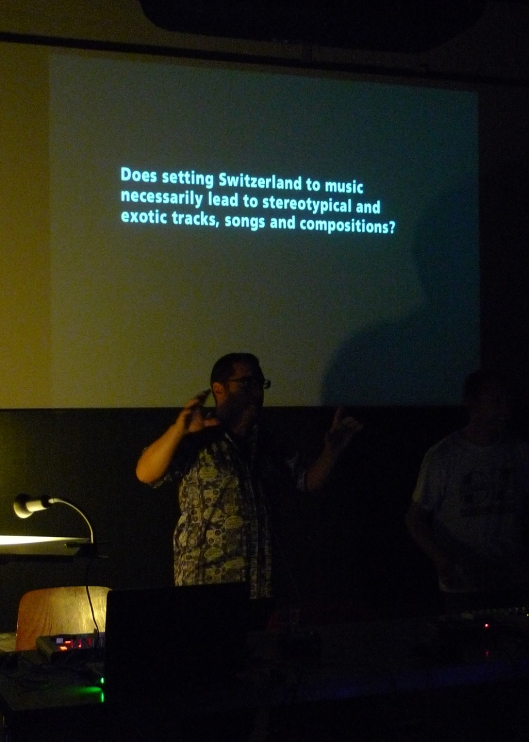 Audiovisual Performance Sonic Traces: From Switzerland by Thomas Burkhalter, Simon Grab and Michael Spahr (Ber/Zurich) – It was a fascinating one hour… 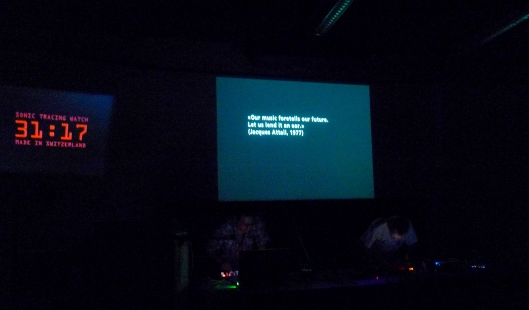