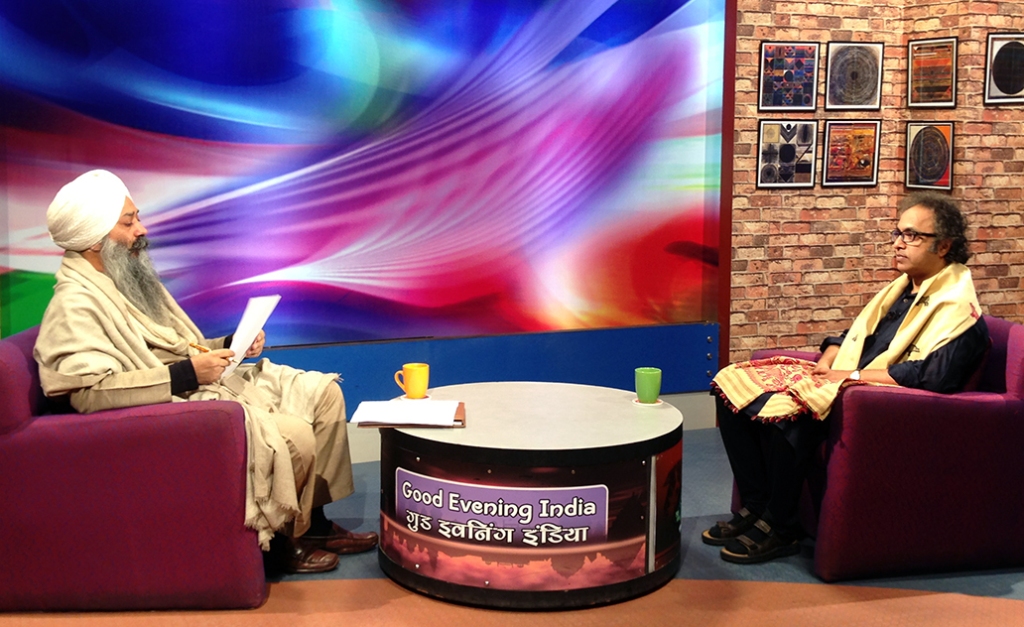 Shubhendra Rao with his guru, Pandit Ravi Shankar in 2011. California.
Photo Courtesy, Shubhendra Rao.
It s actually a single photo I Photoshop-fiddled with.

On December 13, I was to leave for Chandigarh to be with my ailing mom who was hospitalized a few days ago, when received a call from the national television asking me to anchor a special show of Good Evening India which is telecast live. My interview of Ustad Rahim Fahimuddin Khan of Dagar-vani was very well appreciated, it seems, that the person calling recalled it – well, it worked, the praise got me interested 🙂

I called my sister-in-law first, and later my mom, in Mohali to see if I would have her permission to come and be with her a couple of days later. She said sure.

It is well known in my circles that I wasn’t a fan of his – so that was a challenge. This meant I had to do research on him as I was not familiar with his life story – the names associated with him – his mentors and the ones who inspired him nor the ones whom he mentored and the ones he so inspired throughout his life span. The evening before the show, His Holiness Maharaj Baba Jagjit Singh Ji of the Namdhari Darbar, passed away as well, which was very sad – we were still engaged in getting the consent of Honorable Governor, Punjab to visit Bhaini Saheb and do the investiture ceremony – felicitating him as the Tagore Fellow of the Sangeet Natak Akademi, New Delhi. This ensured I had lot less time to research on Pandit Ravi Shankar.

I finished writing some award nominations and then Baba Jagjit Singh Ji’s obituary before I got to sit down and research on Ravi Shankar. I found his story quite intriguing and exciting. I particularly found Reginald Massey’s writeup on him very useful for it covered many a detail of Ravi Shankar’s early life. I learnt about how Andres Segovia (also my favorite) and Russian Opera singer Feodor Challipine inspired Ravi Shankar; how he actually wanted to initially study from Ustad Inayat Khan, the father of the legendary Ustad Vilayat Khan and so much more. I also read other articles and his official website, which wasn’t as informative as some of the obituaries that celebrated his life-time contribution to the world of music. After careful sifting and assorting, I ended up with about 8 pages – including one on Shubhendra Rao, whom I was to simultaneously interview in the show. Shubhendra, whose father N R Rama Rao was one of the first students of Ravi Shankar, is named after Ravi Shankar’s late first son with Vidushi Annapurna Devi. He is himself married to the cellist, Saskia Rao De-Haas and known as an able sitar virtuoso. I particularly enjoyed the time with him before the show in the green room before they whisked him away for make up. I have always escaped from facing the wrath of the makeup artists for it seems, they do not find any canvas to paint in between my mile long turban and mustache and beard.

I did get some fine plaudits during the show (via the ear phone I wore) as well as after the show but I only heaved a sigh of relief once I saw a recording once back at home. Being a live telecast I had no second chances and I did have feeling that I could have done more justice. Well, that is how it is with life – we seldom get a second chance.

My parting salute and respects to another illustrious virtuoso, Pandit Ravi Shankar (1920-2012), who has since moved on…