After just spending a few days with our Ustaad and Gursiblings, there has been a significant amount of much progression in our lines of learning. I always find myself having much to write in these post-course reviews. We hear beautiful, ancient anecdotes of Raagis, we support each other as we learn and practice, and we become cognizant of the milestones we’ve reached as students. However, most importantly, we become aware of our shortcomings and skills that need sharpening.

I’ve noticed my voice getting a lot stronger as I am now able to amplify it to high volume and approach notes through different paths with much more ease. However, when listening to myself sing, I can still hear instability and shakiness, as well as the inability to completely imitate what I hear. After the vocal training received at this course, one of the most valuable lessons that I learned was to perceive music notes as a script and to look at a raag as a language. Once you gain a grasp on the script, you can better understand and learn the rules of a language. For example, one who can read and write English is able to distinguish it from other languages that are also written in the Roman script, such as French or Spanish. Similarly, once you have the basic understanding of the relationship between notes, you begin to recognize and form sentences in different raags. You first pick up on small phrases and progressively gain the ability to form complex sentences. Once we become well versed in the skeleton of the language, we pay attention to different pronunciations, inflections, and dialects. In singing, these elements can be compared with the different paths taken to render a phrase, such as lehaks or meends. In writing and in speech, commas and full stops are used to indicate where to pause and breathe. Likewise, in singing, a breath is taken once a phrase is completed. Once you begin to recognize what consists of a phrase in a certain composition, you learn when and how to pause in a manner that presents the composition as smooth, seamless, and meaningful.

A lot of these things became clear as I was semi-spontaneously asked to sing a Tukhaari teeka at Gurdwara Dashmesh Darbar, Brampton. As I was singing, I was mostly worried about messing up and sounding horrible. Because of my nervousness, my voice was shakier than usual. Although I’ve not completely learned how to, I have realized that it is important to create my own space, regardless of where I am singing. I was able to progressively improve on this as I was singing, and was in a comfortable space near the end of the performance. I was given two main points of critique after singing: maintaining speed and knowing where to stop. The goal of performing a teeka is not to simply spoon-feed how and what you are singing to the audience; therefore, an upbeat tempo must be maintained to perform at a level that demonstrates having undergone training and rigorous riyaaz. This allows for the audience to analyze and do some mental gymnastics in order to understand what is happening. Maintaining a dhrut taal is a challenge that is manifold; it is vital to hit each note clearly while still sustaining the raag. Performing this teeka gave me the motivation to continue my riyaaz in full swing and work on my weaknesses.

At a certain point in time, the thought of riyaaz was a very intimidating and daunting one. But now, the process of riyaaz has proven to be a form of tap in itself. The exercises that once seemed repetitive and boring now give a sense of alleviation as I look back and see how far they’ve brought me. Akaar gave me the opportunity to strengthen my voice while simultaneously having given me the chance to meditate and improve focus. When singing sargam exercises, one should think of nothing else and focus solely on traveling with the ascending and descending notes. At this course, we were given 28 different scales with varying combinations of teevar and komal notes. I plan on making this the focus for my practice over the next little while. I will apply each scale to the vakr rohi avrohi exercises given to us earlier this month to 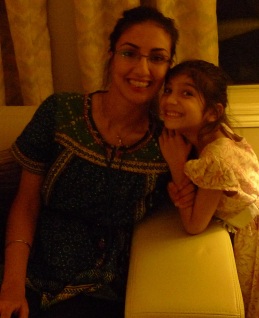 strengthen my understanding of the relationship between different combinations of notes. Furthermore, I will use the teekas in various raags to me to sharpen my rendition of notes and to practice giving my voice greater weight in exercises like gamak.

Through this process of learning, I have been able to create a peaceful arena in my life. Prospectively, I seek an immense amount of comfort in what I’ve been taught. I see myself, as an old lady, in the abyss of kaliyuga, with my most cherished asset being the beautiful means to spend time with akaal. On top of this, I will also have the beautiful memories of being taught how to have this precious interaction.